Digital Live in Schauman Hall – The Tales of Hoffman

Jacques Offenbach became rich and famous as a composer of operettas full of witty topical references and irresistible tunes that would come to signify everything glitzy about 19th-century Paris. But as he neared the end of his life, he craved more: acceptance as a “serious” composer. He decided to write an opera and chose the fantastical and often enigmatic stories of German writer E.T.A. Hoffmann as his material. As a creator of light entertainment, Offenbach longed to find a place in the world of high art. As a German Jew living in Paris, he was an outsider in another way—just like the protagonist of what would become his unfinished masterpiece, Les Contes d’Hoffmann.

“Why, so late in his career, did Offenbach feel this need to be accepted?” asks Bartlett Sher, who directs a new production of Hoffmann opening on December 3, with Met Music Director James Levine conducting. “That led me to consider Offenbach’s sense of being Jewish and an outsider. Whatever group he was in, he always appears as an outsider who never feels like he belongs, never feels like he’s connected.”

In bringing his vision of Hoffmann to the stage, Sher found inspiration in the life and works of author Franz Kafka—another German Jew, living in Prague. In both E.T.A. Hoffmann and Kafka’s work, sinister, shadowy powers haunt the lead characters. And in each of Hoffmann’s tales that make up the opera’s three acts, the protagonist tries to break into what seems to be a closed world. The character’s dilemma is the same as Kafka’s and Offenbach’s, Sher explains: “It’s a matter of how an artist can feel accepted and rejected at the same time.”

Rising tenor Joseph Calleja will portray that artist, taking on Offenbach’s tour-de-force title role for the first time in his career. Anna Netrebko, Kathleen Kim, and Ekaterina Gubanova star as the women he loves and loses, and Alan Held sings the four villains.

Each of Hoffmann’s three acts is based on an individual story written by the historic Hoffmann, with a different woman as the centerpiece. The prologue and epilogue, framing the narrator-protagonist’s memories of his unhappy love affairs, tells an additional story of a current (and equally unsuccessful) relationship. Through it all, the character of Hoffmann is accompanied by his mysterious friend Nicklausse, played by Kate Lindsey in the new production. Nicklausse—eventually revealed as the poet’s muse—is the one constant in the opera’s fragmented storyline, driving the title character away from love but onto greater artistic achievements.

The episodic structure makes Les Contes d’Hoffmann a challenge to stage, as does the opera’s unfinished state. Offenbach died before the work’s successful premiere, and questions about his final intentions for the opera have remained unanswered or debatable ever since. What music to include and what to leave out, whether to use spoken dialogue or sung recitative, even the order of the successive episodes—all of these aspects have provoked controversy. Over the years, excerpts from other Offenbach works have sometimes been added to the score, and previously unknown numbers originally written for Hoffmann have resurfaced. “The music is so inspired,” Maestro Levine says, “and I think we have made effective choices in the absence of an authentic, fully realized original version, using a great deal of the information that has come to light over the years. Even though Offenbach didn’t finish it, his conception of the piece is clear.”

Hoffmann occupies a singular place in the repertory. “The opera has a very non-linear and unexplained narrative,” says Sher. “Rather than think of it in terms of narrative as a linear ‘once upon a time’, it’s sort of like fragments, or poetic representations of the state of somebody’s mind.”

The director’s task, then, goes beyond merely making sense out of a seemingly disjointed drama, and into finding a way to explore these fascinating complexities. With Kafka as his central influence, Sher chose an era in which these same issues of fragmentation were most explicit in art and ideas: “The 1920s become a source point—not because of the time itself, but by using the kind of art that was made in the twenties.” The director points out, though, that this doesn’t mean a literal updating: “If you walk around Venice today, you will be in the presence of the 18th century, and the 15th, and the 21st, all at once.” The design by Sher’s collaborators Michael Yeargan (sets), Catherine Zuber (costumes), and James F. Ingalls (lighting)—with choreography by Dou Dou Huang—will reflect this approach.

Like the changing, fictional world around him, Hoffmann himself evolves (or, it could be argued, degenerates) over the course of the opera, making it one of the most extraordinary roles in the repertoire. Hoffmann, Calleja says, “can be viewed as a mixture of roles from the tenor repertoire staples.”

What is certain is that Hoffmann the character, like Hoffmann the author, is a true artist. A central feature of the opera is that the title character’s repeated failures as a lover make him creatively successful. “I think you have to be realistic in love,” Calleja explains, “and Hoffmann is certainly not realistic.”

An enigmatic hero, a lineup of four leading ladies, and a setting that mixes the familiar with the fantastical, the glamorous with the grotesque—Hoffmann packs more dramatic punches than many other operas combined. For Sher, the work’s uniqueness is its allure. “I like that it’s a narrative challenge,” he says. “I like that it’s different.” Maestro Levine agrees: “Hoffmann is one of a kind.”
—William Berger 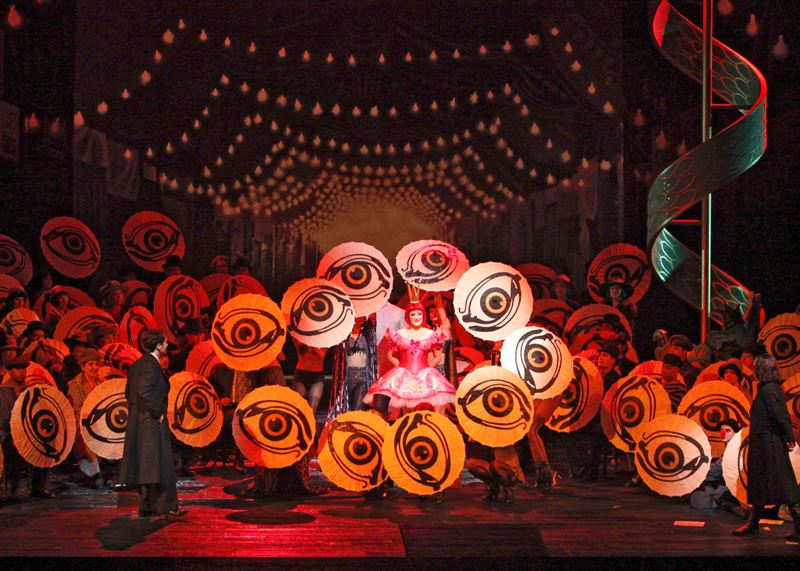