Music and textx by  RICHARD WAGNER

ACT I. In the Venusberg, magical mountain abode of Venus, the minstrel Tannhäuser kneels beside the goddess, who for more than a year has bestowed her love on him, as fauns and bacchants frolic and the call of sirens echoes from grottos below (“Naht euch dem Strande!”). Tannhäuser, weary of the revels, half-heartedly sings a hymn of praise to Venus (“Dir töne Lob!”) but ends by asking for his freedom. Surprised, she promises him even greater delights if he will stay (“Geliebter, kimm’!”), but he only longs all the more for the simple pleasures and pains of the earthly life. Enraged, Venus curses his hope of salvation (“Zieh hin, Wahnsinniger!”). When he cries out that his hope rests with the Virgin Mary, the Venusberg disappears.

Tannhäuser finds himself in a sunny valley near the castle of the Wartburg. A Shepherd boy sings a cheerful song about spring (“Frau Holda kam aus dem Berg hervor”). As a procession of pilgrims passes en route to Rome, the minstrel falls to his knees, praising God. Horns announce the approach of Landgrave Hermann and his knights, returning from the hunt. Recognizing Tannhäuser, who was once their comrade, they beg him to return with them. One of the knights, Wolfram, reminds Tannhäuser that his singing won the love of Elisabeth, the Landgrave’s niece (“Als du in kühnem Sange”). On hearing her name, Tannhäuser rejoins his companions (“Zu ihr!”).

ACT II. In the Hall of Song, Elisabeth hails the room in which she first heard Tannhäuser’s voice (“Dich, teure Halle”). When Wolfram leads in the minstrel, she ecstatically welcomes him (“Der Sänger klugen Weisen”); after telling how she suffered in his absence, she joins him in praise of God, who has blessed his songs. When Tannhäuser has gone, Elisabeth and her uncle receive their guests, who enter the hall in stately procession (chorus: “Freudig begrüssen”). The Landgrave orders a song contest in praise of love, the winner to receive his heart’s fondest wish from the hand of Elisabeth (“Gar viel und schön”). Wolfram delivers an idealized tribute to Elisabeth, whom he too loves (“Blick’ ich umher”). Tannhäuser, his soul still possessed by Venus, counters with a frenzied hymn to the pleasures of worldly love (“Auch ich darf mich so glücklich nennen”). In dismay, outraged knights draw their swords to strike the sinner. But Elisabeth throws herself before Tann-häuser, begging the knights for mercy (“Zurück von ihm”). The Landgrave promises Tannhäuser forgiveness on the condition that he join a passing band of pilgrims bound for Rome (“Ein furchtbares Verbrechen ward begangen”). Falling at Elisabeth’s feet, Tannhäuser kisses the hem of her robe, then rushes from the hall to join the pilgrimage.

ACT III. Several months later, Wolfram discovers Elisabeth praying before the shrine in the Wartburg valley (“Wohl wusst’ ich hier sie im Gebet zu finden”). At the approach of a band of returning pilgrims (chorus: “Beglückt darf nun dich”), she searches in vain for Tannhäuser. Broken with grief, she asks the Virgin to receive her soul in heaven, where she may continue her prayers for Tannhäuser (“All-mächt’ge Jungfrau”). Wolfram, gazing after her as she departs, takes up his harp and asks the evening star to guide her (“O du mein holder Abendstern”). As night falls, Tannhäuser staggers in, ragged and weary. He tells Wolfram of his pilgrimage to Rome, where the pope said he could no more be forgiven than the papal staff could burst into bloom (“Inbrunst im Herzen”). Turning his back on his faith, he calls on Venus (“Zu dir, Frau Venus”), who appears. Wolfram, begging the knight not to renounce his hope of redemption, brings him to his senses by invoking the name of Elisabeth (“Ein Engel bat für dich”). Tannhäuser stands transfixed, and the faithful girl’s funeral procession winds down the valley (“Der Seele Heil”). With a cry, Venus disappears. Supported by Wolfram, Tannhäuser stumbles to Elisabeth’s bier, imploring her prayers in heaven, then falls lifeless. As dawn breaks, pilgrims enter singing of a miracle: the pope’s staff, which they bear forward, has blossomed (chorus: “Heil! Der Gnade Wunder Heil!”).

In Tannhäuser, written between Der Fliegende Holländer and Lohengrin, Wagner took another step away from conventional opera—with its division into set arias, ensembles and recitatives—toward music drama, in which words, music and action form a dramatic whole. Even the solo numbers that are sung during the song contest grow organically out of the plot. Wagner completed the text on May 22, 1843, his thirtieth birthday, and the music on April 13, 1845. None of his other works was subject to so many changes, the most famous being the expansion of the Venusberg scene, undertaken in 1861, for the Paris Opera. Both versions are still in use.

Wagner based the plot on two main sources—a poem about the song contest in the Wartburg, dating from the Middle Ages, and the folk song “Danhauser,” dating from the sixteenth century. His decision to combine the two was spurred by a treatise written by one Professor E. T. Lucas of Königsberg, who claimed the protagonists of the two stories were one and the same. In addition, Wagner found various examples and suggestions for the treatment of these legends in the writings of Eichendorff, Tieck, Heine and E.T.A. Hoffmann. The current Met production was first seen in the 1977-78 season. 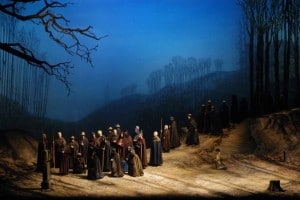